I feel it is really getting out of control when stuff like this happens. Whether your famous or a nobody everyone should have a choice as to where they want to get a puppy and from whom. Especially when it marks an event in your life that can never be repeated.
Past White House dogs have all been purebred but NOW it's a problem?

Fifteen minutes of fame turned into four months of bitter remorse for the Chester County woman who sold the Bidens their adorable little German shepherd puppy.


Linda Brown's been investigated, scorned and had her life threatened.

"I thought when Joe Biden bought a puppy from me, what an honor," Brown told the Daily Local News. "Out of millions of breeders in the country, in the world, he picked me." That was December.

When the story got out, Brown faced backlash from pet lovers who thought the Bidens should have opted for a shelter over a breeder to find their new puppy.

PETA seized the moment as an opportunity to blame the killing of shelter animals on people who buy from breeders. The organization's TV commercial, "Buy One, Get One Killed" ran in Delaware after the Biden puppy story made headlines.

Dog wardens from the state showed up at Brown's Wolf Den kennel, repeatedly, for inspections.

"I was cited for a piece of kibble on the floor and five strands of dog hair. They took a picture of that, they walked around, snapped pictures and don't tell you why," Brown told the newspaper.

She was found "not guilty" for each citation, but hiring a lawyer for the court hearings has cost her $4,000 so far in legal fees.

Brown says she and Biden both received death threats from animal activists.
"Never, never, never again," Brown said about selling a dog to anyone with a high profile.

Her advice to breeders who've called about the Obama's puppy search:
Don't do it!

"It's been horrific since December," she said.

It's a shame people can't mind their own business, if someone opts to get a puppy from a breeder so be it, and if someone wants to adopt from a rescue thats great too. This is why I served and live in the United States of America, I have freedom of choice as long as it does not infringe into others freedom. Not everyone fits into a mold, just look around in your own family to see this, I can.

I guess the breeder of the PWD puppy that Obama just got from Sen Kennedy will be on the hit list next. 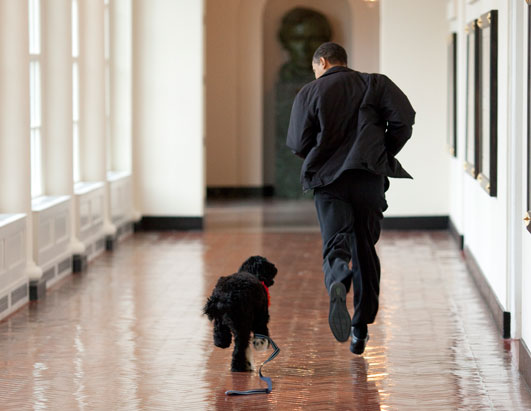 Similar topics
» SO frustrated with the puppy!
» What are my Fifes ?
» Mastin-x Puppy needs home
» question about worms
» Numbers of eggs.